Ebola, Karma And The Cell Membrane: Vulnerabilities of an enveloped virus

[Edit 8/21/14 - I realized that I should have begun this post with the following disclaimer: Warning! Gratuitous anthropomorphizing for the sake of communicating science fun of it follows. Just remember that viruses are passive and we'll be good. Thanks. end edit] 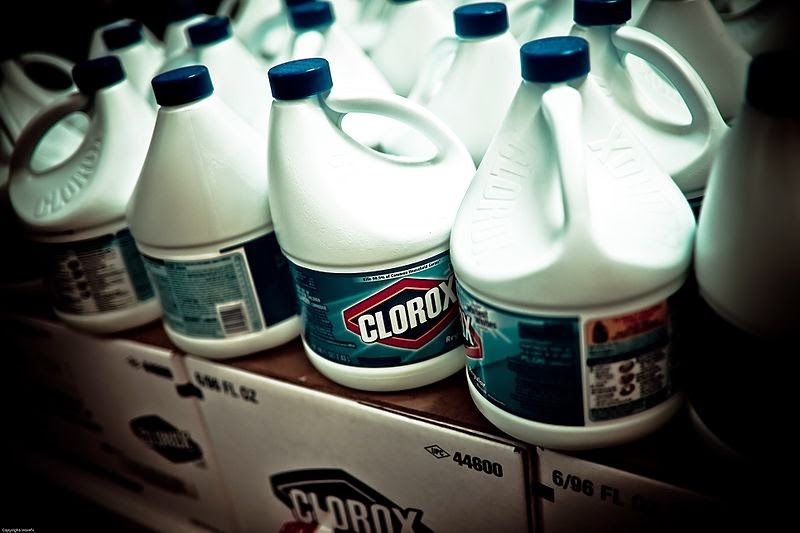 There's been a lot of discussion lately about what methods of disinfection will actually kill the Ebola virus. I can imagine that in the middle of this epidemic, in a place with very few options, the idea of not having, or not choosing, the right method is a terrifying prospect. Soap? Hand sanitizer? Bleach? What to do?

Viruses are non-cellular infectious agents composed of a genome (genetic material, either RNA or DNA) and proteins. Ebola's genome is made of single stranded negative-sense RNA. This means that Ebola has one relatively small strand of RNA that contains all the information it needs to make more Ebola virus particles. And it's backwards. That's amazing, by the way. The "negative sense" description means that the RNA can't serve as messenger RNA. Messenger RNA (mRNA) if you remember, is the message from which proteins are made: the coding sequence of the mRNA dictates the amino acid sequence in the resulting protein. So for negative sense RNA, mRNA is made by using the backwards copy as a template (this link provides details of this). Then the mRNA can be used as a template to make the proteins. To make more virus particles Ebola also must make copies of its genome. This, of course, must all be  done using our cellular machinery.

Once the necessary proteins are made, the Ebola proteins and copies of the genome get together to form new virus particles. This all happens within the cells that the virus has infected. Oh, and while the virus is keeping your cellular machines busy, they aren't available to do what they need to do to keep your cells happy. This can play a role in making you sick.

The last thing that needs to happen before the newly made virus particle can go on to infect other cells or other organisms, is that it must leave your cell. And instead of politely declining that last round of synthesis and using the door, it busts through your cell membrane, taking part of it in the process. Yes, it  inserts some of its own proteins into the membrane, sidles right up and gets cozy (doesn't even buy it a drink) and BAM wraps it around itself and rips it off. Now it is a complete virus particle safely surrounded by what had been your cell's lipid membrane, with viral proteins embedded. This is what we refer to as the viral envelope and the completed viral particle is called a virion. Ebola virions are shed through bodily fluids which can transmit the virus. I'm sure you can tell by the shape that the budding virus in this graphic representation(wikimedia commons) is not Ebola. Ebola is long and filamentous, but this one is better for illustrating the concept. Here's a really nice paper on the Ebola life cycle if you want to read more about this amazing process.

Well, it turns out this new shiny viral envelope is actually Ebola's Achilles' heel. Not all viruses have envelopes, and those that don't are actually much more stable in the environment. Those viruses are encapsulated in what is known as the viral capsid, which is made of proteins, not lipids, so it's very sturdy. All the viral proteins are tucked safely into the capsid so it's much more difficult to inactivate those viruses. Unfortunately for an enveloped virus like Ebola, that lipid membrane it stole is pretty susceptible to many environmental factors like sunlight (UV radiation), heat and drying, but also to all sorts of disinfectants and detergents, even alcohol. So even hand sanitizers work on Ebola, as long as the concentration of alcohol is over 60%.

So washing with soap and water is good, disinfecting with a 10% solution of bleach in water works well and hand sanitizer is effective, as are all medical grade disinfectants. When washing or sanitizing hands, sing Row Your Boat three times and you've done it long enough. ;)

So, because Ebola steals our cell membranes it is more susceptible to disinfectants and environmental factors, and given enough resources and training, the people fighting it will prevail.

And I like to think of that as a bit of microbial Karma.

PS. Check out these links if you want to make a difference in this outbreak!
Africare
Global Giving
Direct Relief
Action Aid
Caitlin Rivers blog has a ton of links to help! Thanks Caitlin!!