Fireside Chat with Dr. C.J. Peters: How will the 2014 W. Africa Ebola epidemic play out? 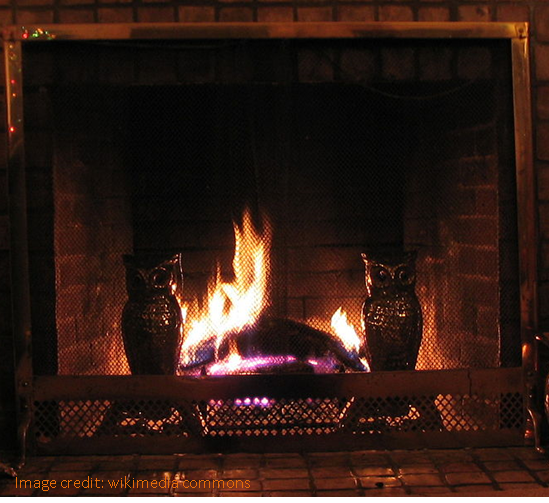 While scientific advancement greatly depends on controlled experimentation, and knowledge and comprehension of the literature, hanging out with an expert and engaging in relaxed but highly stimulating intellectual discourse can be just as valuable. It's often during these informal chats that you become privy to important anecdotal information that can only be gotten through personal experience. While this information might not make it into an article, it is still very valuable and revealing about the subject at hand. Pioneers in the field of emerging infectious disease are often on the front lines during epidemics and have great stories. Just listening is not only educational, it's a whole lot of fun.

This Fireside Chat is my way of sharing one of these conversations with you, of providing what I believe is valuable and relevant information straight from someone who knows because his career is built upon pioneering Ebola research and outbreak response efforts. And as luck would have it, I recently got to sit down with Dr. C.J. Peters and discuss the current Ebola epidemic.

If you don't know C.J. by name, I'm sure you'll recognize his career. He is the original virus hunter and the real man behind Dustin Hoffman's character in "Outbreak". His career is filled with honors and distinction, not the least of which is that the Army created "The C.J. Peters Award" in his honor. The award states: "In the inception and granting of this award, we honor Colonel C.J. Peters, Medical Corps, a brilliant and innovative scientist, scholar and physician...whose work is a lesson not only in science, but in humanity." If you want to read about his amazing career, read his autobiography Virus Hunter. His is truly a remarkable journey. Although to make it even more riveting he should consider updating it with a chapter on being my PhD mentor. That was probably more exciting than he expected. Anyway, I had the pleasure of sitting down with C.J. and discussing this outbreak. This man is brilliant and agreed with everything I said, but he also brought up some things that I hadn't thought of. I am very pretty smart too, so I agreed with everything he said. As you can imagine, it was a lot of fun.


As we discussed the current epidemic, many of the factors contributing to the rampant spread of Ebola in West Africa became a little clearer. I have not been to Africa, so C.J.'s experience here was invaluable. He explained to me how very different hospitals over there are. No surprise there, right? Well, the differences are even greater than you might imagine. Yes, as we've already discussed at length, they lack many basic resources, but they also do things very differently. For example, hospitals don't provide food and laundry services for patients, family members are responsible for those. And they don't have reclining chairs or other places for family members to sleep, so they often sleep in bed with the patient. Since direct contact is the single most important risk factor for Ebola transmission, those things combine into a very effective transmission pipeline. 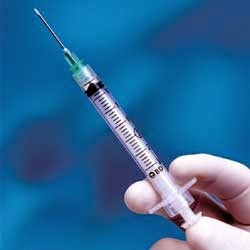 C.J. also stressed the problem of disposable needles and syringes. It turns out that infected needles/syringes play an even bigger role than you might think in Ebola transmission, both between patients and between patients and HCW. In the U.S. we use disposable syringes one time and toss 'em. You'd think that the switch from stainless steel needles and glass syringes that had to be sterilized, to disposables would help. But the problem is that they don't have enough. They hardly have any. Disposable syringes can't be sterilized by the customary heat methods and disposable needles might survive one or two rounds of sterilization, after which they're unusable. So they do what they have to: use the same needle/syringe in different vials or multi-use vials, and between patients. This is a very effective way to spread a virus.

In addition, glove shortages aren't the only problem with gloves. Here in the U.S., whenever doctors or nurses see a patient in the E.R. they wear gloves. It became standard with the advent of HIV. C.J. explained that that's not the case in these hospitals treating Ebola patients. Gloves are hard to come by, and if they are there, they are saved for only the most overt needs. Ebola patients don't have signs on their foreheads, so they may be cared for without gloves before Ebola is suspected. C.J. made the point that using gloves correctly for every single patient contact would go far in slowing the transmission of this virus, if they were available. You see, Ebola doesn't actually spread that easily.

To illustrate this, let's consider a concept that epidemiologists use: R0 (R naught). This is the basic reproduction number of an infection: the average number of cases that a single infectious case will cause in an uninfected population. Basically, it's how many people one person can infect. While this number is based on a mathematical model, with assumptions etc., it's been shown to be very relevant to what we see in epidemics. The higher the R0 the more the virus spreads. For Ebola, even with environmental factors that increase its transmission (lack of sanitation and resources), the R0 is relatively low: 2.7 for both the 1995 Kikwit, and 2000 Uganda outbreaks. 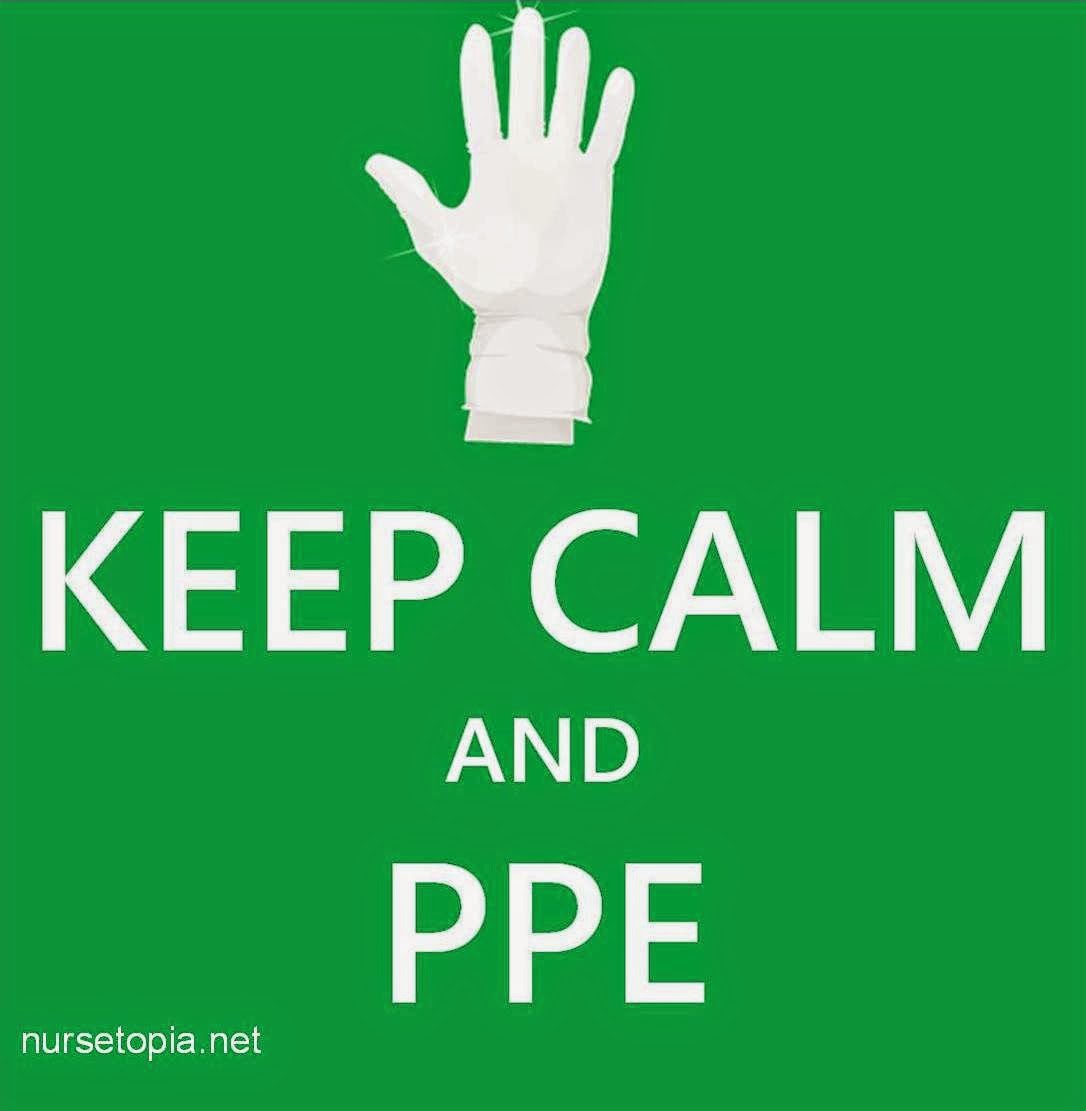 So it's clearly not magically infectious. They just need PPE and the training to use it. C.J. was clear that they need trained people with the basics, including gloves, gowns, masks and goggles, to go from town to town and hand them to the nurses, doctors and family members caring for Ebola patients, and explain to them when and how to use them. These people must be able to not only train locals in proper use of PPE, but also communicate effectively while respecting cultural differences. Even if you have such people, and we don't have enough of them, this isn't always easy in communities rife with fear and mistrust.

And there are other factors making the logistics of supplying hospitals even more difficult. Turns out, supplies don't always make it to their intended destinations. Delivery trucks can be raided or willingly detoured for the sake of profit for a small few. C.J. described this as a very real problem during the Kikwit Ebola outbreak in 1995, and in 2014 we've seen the armed invasion of medical facilities to steal supplies and "liberate" patients. These additional challenges are incredibly complex, and packed on top of minimal health care infrastructures that are already overtaxed. It's a heartbreaking and nearly foolproof formula for tragedy.

So what does it all mean? Well, C.J. made it clear that it means that Africa is in real trouble. This virus is likely to keep spreading within Africa before this is over and those countries already affected are in it for the long haul. They face the very real possibility of rapid depletion of resources and the death toll will keep rising. But it also means that, as I said in my first post, this virus won't cause real problems outside of Africa, and it certainly won't cause a pandemic. Those suffering with Ebola infection generally don't have the resources for international travel. Those that do are unlikely to get on a plane while symptomatic; the symptoms of Ebola are debilitating. Even if a few people travel internationally and then come down with symptoms, most other countries will be able to contain it. Especially since it's now on our radar. 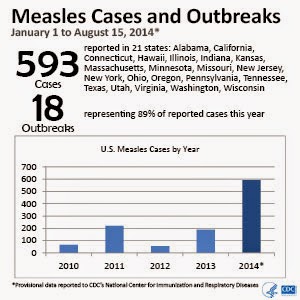 Of everything we discussed, the one thing that C.J. said that stuck with me the most, was how the R0 of Ebola compares to that for measles. Measles has an R0 of 12-18. That means that someone infected with measles could infect, on average, up to six times more people than someone with Ebola. Six times. And the incidence of measles, a serious and potentially life-threatening illness, is rising in the U.S. because people are choosing to not vaccinate their children. Did you know that between Jan 1st and August 15th of this year (2014) there have been 593 diagnosed cases of measles in the U.S. and 18 outbreaks? It hasn't been that high since...I don't know when and most of those cases were in the unvaccinated. This boggles my mind. The measles vaccine became available in 1963 and before that, when it wasn't an option, each year ~500,000 people were infected in the US with 48,000 hospitalizations and 500 deaths. Now adjust that for the current population density and it becomes even more frightening. That is the power of a vaccine. And yet today, we face people choosing to not vaccinate, usually with only enough information to be dangerous. Clearly.


So guess what happens if an unvaccinated person gets measles? They go to the doctor. Guess who they transmit it to while in the waiting room? Almost everyone (90%). Guess who will get really sick? Those in that waiting room who aren't vaccinated will be in trouble and sometimes that means an infant who has not yet been vaccinated, only because he/she is too young. Read about just such an infant here.

My point is this: We live in a country with resources and access to things like vaccines against life-threatening illnesses, and yet we have people who are making the uneducated, arrogant and selfish choice to not vaccinate, and in so doing put their entire family and community at risk. Looking at images from this epidemic, I imagine these same people would be first in line for an Ebola vaccine, and yet they risk their children's lives every day by leaving them susceptible to diseases that are a far bigger problem. But until it hits home they won't realize the flaws in their logic.

Unfortunately, when it does hit home, it will hit hard.