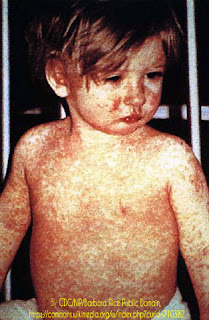 Welcome to my series on vaccines. I'm really happy you stopped by and I hope I can clear up some common misconceptions about vaccines.
I believe all parents want to do what's best for their kids. I really do. And even I, a virologist, had to deal with concerns about vaccines when I found out I was pregnant 12 years ago. For me, that meant doing what I did best: researching and talking to pioneers in the field. To give this topic the attention it deserves, I will be presenting it in many parts; each addressing an important concern that parents have when deciding whether or not to vaccinate their children. Throughout this series of posts, I will be using the term anti-vax as a concise way to type the anti-vaccine movement. I use it to refer to those people who speak out against vaccines, not parents who are hesitant. Wherever you fall, I welcome you here. Thank you for taking the time to come here and discuss this with me.

Today I'm going to tackle the elephant in the room - Autism.
First let me say I understand your concerns and I won't dismiss them. All good parents want to make sure they are doing what's best. One of the biggest concerns when it comes to vaccines, even now, is that people hear from anti-vax proponents that vaccines could give a child autism. And while a lot of people with autism live wonderful and fulfilling lives, no parent wants to give their child autism by making a bad choice, right? Of course not. And there are many people saying it can happen while others say it can't. So what risk is there, really, of getting autism from a vaccine?

Because the anti-vax movement began in earnest with the publication of Andrew Wakefield's falsified study in 1998, I have an entire post dedicated to that debacle and it's worth the read. For this post, I focus on evidence-based science done well.

I can tell you confidently, as a virologist with extensive knowledge of vaccines, and a mother who has researched this particular subject exhaustively, that all scientific evidence shows that vaccines do not give children autism. In the early 1990s, this was a valid concern, because it seemed that the incidence of autism was increasing and it seemed to show up around the same time as children were vaccinated. So we absolutely needed to find out if the one caused the other. But we now have 30 years of data showing zero correlation between vaccines and autism. In fact, an article was just published that puts this debate to rest once and for all. The largest study so far into vaccines and autism has concluded there is no link, even in children who have a higher risk of developing the disorder. The study, published in Annals of Internal Medicine, looked at 657,461 children born in Denmark from 1999 through 31 December 2010, with follow-up from 1 year of age and through August 31, 2013. They found that children with siblings with autism were seven times more likely to be diagnosed with ASD than children without a family history of the disorder, and boys were four times more likely to be diagnosed than girls. However, even in these higher-risk groups, there was no link between getting vaccinated and being diagnosed with autism. None. As far as science is concerned, this is now a non-issue. This has been shown over and over and no one else is going to study this. Now, researchers will spend their time trying to discover what really does cause autism. This is good news for everyone.

Except...what about everything you've heard about the striking rise in autism that seemed to correlate with vaccines? What about all the people claiming their child was vaccinated and then got autism? What about Jenny McCarthy? Let's take at look. 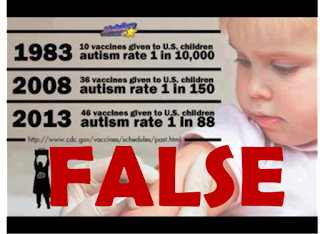 
What I mean, is that the difference, based on extensive and well-designed studies, is that rather than an increase in the number of people with autism, we are seeing an increase in the number of people identified as having autism. Is there a difference? Yes. It means that previously, there were people on the autism spectrum who were not identified as such; their numbers were not counted. Now, these people are being identified. This gives the illusion that more people are on the spectrum now, but that's not true, it means we are now finding and identifying those people, and counting them.

This happened for a number of reasons. First, physicians began looking for it. If they looked for it and found it, they diagnosed it. Before the 1990s we weren't looking for it, so all but the most severe cases went undetected and undiagnosed. Not only that, but the diagnostic criteria for autism has changed - it became a spectrum disorder - that then means that children who would not have met the previous criteria for autism, but who fall on that spectrum, are now diagnosed as having autism. This alone increases the number of children diagnosed with autism dramatically. So now we are looking for it, the criteria to be given the diagnosis has changed, and finally, it's being recognized as something that kids can get help for in school, so parents are more willing to look for and accept the diagnosis, even when the child is on the very mild end of the spectrum. Again, this increases the number of kids diagnosed with autism.

When you take all the data on children with autism or on the spectrum, from 1990-2010 we find: "In 2010 there were an estimated 52 million cases of ASDs, equating to a prevalence of 7.6 per 1000 or one in 132 persons. After accounting for methodological variations, there was no clear evidence of a change in prevalence for autistic disorder or other ASDs between 1990 and 2010." From The epidemiology and global burden of autism spectrum disorders. An excellent but more palatable article is The Real Reason Autism Rates are Up in the US.

I understand that there are some loud voices out there working to convince parents that autism is a real risk from vaccines. But the truth is that they are using fear to advance their own agendas. As a virologist with training in this area, I can say without a doubt that the people who have done these studies do them so that they can also make the right choices for their own kids. They do everything they need to do, to present reliable and unbiased evidence. This isn't easy and there's no money in it, trust me. In addition, dedicated scientists are, as we speak, working diligently to figure out what actually is causing autism, and they are making progress. The two biggest problems with the anti-vax movement are that in addition to putting lives at risk, they make it really hard for scientists to work on the real problem. You may think I have an agenda too, and I do. I am trying to help parents make informed choices that will protect their children as well as those in their communities who cannot be vaccinate.

The child in the picture above has measles. A total of 11 measles outbreaks (3 or more linked cases) have been reported so far in 2018. As of Oct. 6, 2018, 142 individual cases of measles have been confirmed in 25 states and DC. (CDC.gov) Measles kills, yes, but did you know that if someone survives the measles they could have serious long term health problems? One of the most severe is called subacute sclerosing panencephalitis (SSPE) is a very rare, but fatal disease of the central nervous system that results from a measles virus infection. SSPE generally develops 7 to 10 years after a person has measles, even though the person seems to have fully recovered. The risk of developing SSPE is higher for a person who gets measles before they are two years of age.

Other severe complications include pneumonia and encephalitis (swelling of the brain). Patients may need to be hospitalized and could die.  As many as one out of every 20 children with measles gets pneumonia, the most common cause of death from measles in young children. About one child out of every 1,000 with measles will develop encephalitis that can result in convulsions, deafness, or intellectual disability. And finally, for every 1,000 children with measles, one or two will die. There was a reason the measles vaccine was a game changer for parents when it first came out. It saved lives. Vaccines don't cause autism, they cause adults. But as anti-vax propaganda gains traction, we are already seeing frightening increases in measles.
Update March 2019: In the first two months of 2019 there are already 6 measles outbreaks in the US with 206 cases; all started by unvaccinated children. Some have lied to public health investigators, about their child being vaccinated and one man broke quarantine while sick to go to the gym. Measles is not a joke. The fact that a parent thinks that measles is insignificant, has the measles vaccine to thank for that. Because of the vaccine, we haven't had to live through the devastation of measles epidemics. If this vaccination scare-mongering continues, though, we will.

Now, it's October, so go get that flu vaccine for you and your children. Last flu season, >80,000 Americans died of the flu, the highest toll in more than ten years according to federal health officials. Of those, 180 were young children and teenagers. Already this year, it was reported just eight days ago, that an unvaccinated child in Florida died from the flu. Don't let your child be the next fatality.


Am I fearmongering too? Maybe, and I'm sorry for that. Well, sorry not sorry. In this case, the danger is all too real. Just ask the mom whose child died eight days ago. She'll tell you just how real.