The Anti Vax Epidemic - Good Parents Getting Gamed. Episode 3: The Fraudulent Science That Started it All. 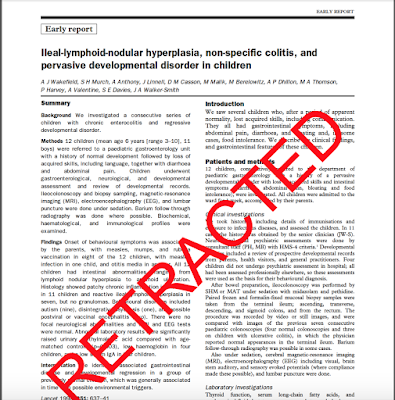 Welcome to Episode 3 in my series on vaccines. Throughout this series I use the term anti-vax as a concise way to type the anti-vaccine movement. I use it to refer to those people who speak out against vaccines, not parents who are hesitant. Wherever you fall, I welcome you here. Thank you for taking the time to come here and discuss this with me. I hope I can dispel some misconceptions and ease your mind about vaccines.

Today I am bringing you a horror story - the story of how one corrupt physician hurt children and parents to make money, and created a legacy of fear that hurts families still. And he's not done. 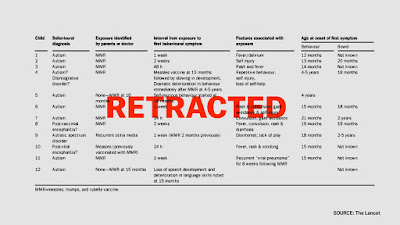 Twenty-one years ago on Feb. 28, 1998, Andrew Wakefield, a British doctor at the time, published a paper in The Lancet. In this paper he falsely linked the MMR vaccine to autism and colitis. The paper and author were investigated and it turned out the science was bogus. Even if it hadn't been bogus, though, the study itself was seriously bad science.
Wakefield drew his conclusions linking autism to the MMR vaccine, using only clinical anecdotes for a mere 12 children. You see, the paper was published as an "early report". It was in essence a case report; a story about patient medical histories. Case reports are helpful, definitely, but no credible scientist would draw conclusions about something like a link between autism and vaccines using a case report alone, let alone a case report with only 12 children. In addition, the MMR vaccine was so common in the UK at the time of the paper, that finding 12 children with autism who'd had the MMR vaccine was almost guaranteed. So even if he had not falsified data, the conclusions in the paper would have still been a horrific misinterpretation.
But he did falsify data and he was investigated. According to Fiona Godlee, editor-in-chief of the British Medical Journal, “It’s one thing to have a bad study... In this case we have a very different picture of what seems to be a deliberate attempt to create an impression that there was a link by falsifying the data.”
Exhaustive investigations into Wakefield’s methods by the British General Medical Council proved dozens of charges against him including dishonesty and ethical violations including abuse of developmentally challenged children. They found:

Severe undisclosed conflicts of interest for Wakefield
Wakefield was paid more than 400K pounds (plus expenses) by Norfolk lawyer, Richard Barr (an advocate for the anti-vaccine group, JABS), to "prove" that vaccines were unsafe in an effort to win a lawsuit against a vaccine manufacturer. He had been specifically charged with finding evidence for a bowel-brain syndrome linked to vaccines and was on their payroll for two years before the paper was published. The lawsuit failed. He also stood to gain money through the vaccine alternative he was advocating. Instead of the combined MMR vaccine, he advised people to get their children single shot vaccines over a period of time. He just so happened to have filed a patent for a single disease vaccine. He wasn't telling people not to vaccinate their kids! He was telling them to use his vaccine! Because his paper actually started the anti-vax movement, his vaccines weren't as lucrative as he expected so these days he is on the anti-vax speaker circuit in the US where he is flourishing. He should be indicted and forced to publicly apologize
.
Fraudulent manipulation of data in the study
British investigative reporter Brian Deer actually followed up with each of the 12 families used in the "study". What he learned through diligent research, was that "No case was free of misreporting or alteration." Wakefield altered the data to fit his agenda - he was actually told to find evidence for an autism-colitis syndrome. The backbone of his paper was regressive autism - autism in which children develop on schedule initially before autism symptoms appear. But only one out of the 12 children in his paper was actually diagnosed with regressive autism - child 2. Three of the nine described in the paper as having regressive autism, clearly did not have regressive autism and in fact were never diagnosed with autism at all; before, during, or after the study.
Further, if a child's "autism" symptoms appeared before they were vaccinated, Wakefield reported in his paper that the symptoms appeared after vaccination. Another example of data falsification are the histological findings of child 3. After surgery he didn't need, pathologists examined colonic samples and found them to be normal. Three months after he was released from the hospital, a co-conspirator of Wakefield's asked for the boy's records and on them, changed the diagnosis from normal to "indeterminate ileocolitis". Stunning corruption on display here.
Here is a summary of what was altered in the paper compared to what was in the actual medical reports. It's from this paper published by Brian Deer which goes into detail regarding the entire scam and has excellent citations.


Comparison of three features of the 12 children in the Lancet paper with features apparent in the NHS records, including those from the Royal Free hospital
See supplementary data on bmj.com for a version of this table with detailed footnotes.
*Regressive developmental disorder—autism.
†Royal Free hospital pathology service.
‡First behavioural symptoms ≤14 days after MMR.


Unethical treatment of children in the study
The 12 kids in the study were treated like guinea pigs. Surgery was done on children even though there were no clinical indications to do so. Others were admitted for invasive procedures without being seen beforehand. Described in one journal article: "Dr Wakefield, John Walker-Smith, and Simon Murch are accused of ignoring limitations placed on them by the research ethics committee of the Royal Free Hampstead NHS Trust and subjecting children to procedures that were not clinically indicated, including lumbar punctures, barium meals, general anaesthesia, and colonoscopy." In addition, they gave child 10 an experimental drug called “oral measles virus-specific dialyzable lymphocyte extract transfer factor”. They did this without having any information on it's safety in children and an entire year before the ethics committee gave them the approval to do so. Turns out, this was another business investment for Wakefield. He had "submitted a proposal to the Royal Free Hospital School of Medicine 'to set up a company called Immunospecifics Biotechnologies Ltd to specialise in the production, formulation and sale of Transfer Factor.' The proposal stated that Child 10's father, known as Mr 10, would be managing director of the company, while Dr Wakefield would be research director."
One of the strangest things he did - and talked about in public - was paying kids for blood samples at a birthday party. For that he was charged with "taking blood in an inappropriate social setting without ethical approval, of offering financial inducements, of showing a callous disregard for the distress and pain of the children, of abusing his trust as a practitioner, and of bringing the medical profession into disrepute."

The Fallout
Wakefield was found guilty of 30 charges, including four counts of dishonesty and 12 of clinically  unjustified invasive procedures on children and deemed irresponsible and unethical. Andrew Wakefield and a co-author were stripped of their medical licenses. Each of his co-authors removed their names from The Lancet paper voluntarily, Wakefield refused to do so and to this day advocates against vaccines. After the extensive investigation, The Lancet formally retracted the paper in 2010 - twelve years after it had been published.

But What About Brian Hooker? 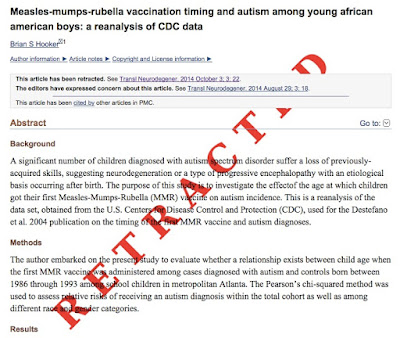 Brian Hooker published a ridiculous and immediately retracted paper in 2014 in Translational Neurodegeneration: Measles-mumps-rubella vaccination timing and autism among young african american boys: a reanalysis of CDC data." He did so many things wrong with this paper but regardless of anything else he did, the fact that he analyzed case control data as a cohort study invalidates the entire thing. But he also manipulated the stats by using the wrong statistical tests in an effort to get the stats to validate what he wanted the data to say. How did another bogus autism paper get published? Well, it was a brand new journal and based on the journal's reason for retraction - "...undeclared competing interests on the part of the author which compromised the peer review process." - I'd say he included in his list of suggested reviewers, those who were in fact his very own anti-vax cronies. So forget Hooker. He was just trying to cash in on the anti-vax trend. In the process he stirred up more anti-vax "ammunition" and made it harder for people trying to help parents by getting the facts out there.

So here we are...two decades later and the damage done is unconscionable. In 2018 there were 17 measles outbreaks in the US. Currently, there is an outbreak in WA state so severe (42 confirmed cases as of Jan 31st) that Governor Jay Inslee declared a state of emergency. One family even took the virus on a trip to Hawaii where they were quarantined.

To add insult to injury, a robust and well-executed study, published in 2015, revealed that the measles vaccine is more important than we realized. It turns out that the measles vaccine not only prevents measles, it reduces mortality from any infectious disease by up to 80%! This is because when you get sick with the measles, the virus wrecks your immune memory and it takes 2-3 years for that to recover. This is a big deal. It's why we're fighting so hard to educate people. I know you all just want to protect your kids, but refusing vaccination is only doing more harm. Honest.

Wakefield and Hooker are not alone in the blame for this misinformation campaign. The media picks up these stories and runs with them. Media in all forms have a responsibility to provide clear, evidenced-based reporting. Instead of perpetuating anti-vax propaganda, they need to provide real, verifiable data, to talk about the hundreds of well-devised and well-executed studies that show without a doubt that vaccines do not cause autism. Interview scientists, not celebrities.

There are two devastated demographics in this vaccine-autism debacle: children and communities who are at risk of measles and the immune deficits it brings, and those children and families who are struggling with autism. When anti-vaxxers harp on vaccines, they not only put entire communities at risk for deadly epidemics, they prevent researchers from unscrambling the true physiological/genetic/environmental anomalies that lead to autism.

And that is tragic for us all.