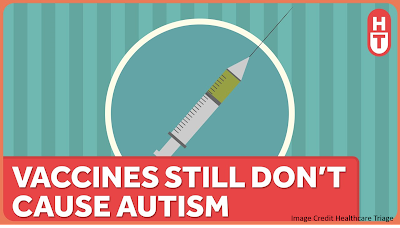 Welcome to Episode 6 in my series on vaccines. Throughout this series I use the term anti-vax as a concise way to type the anti-vaccine movement. I use it to refer to those people who speak out against vaccines, not parents who are hesitant. Wherever you fall, I welcome you here. Thank you for taking the time to come here and discuss this with me. I hope I can dispel some misconceptions and ease your mind about vaccines.

Now that we know the real reason behind establishment of VICAP, let's look at the cases that have been adjudicated. More specifically, let's look at autism cases. (links are to court documents (& scientific articles where appropriate))
Omnibus Autism Proceeding: The Special Masters created the Omnibus Autism Proceeding (“OAP”) to determine the relationship, if any, between vaccines and autistic spectrum disorders. They chose six test cases, that, in the petitioners’ judgment, presented the clearest and strongest arguments for the proposition that vaccines had caused autism, representing two separate theories of causation (1: that measles, mumps, and rubella (MMR) vaccines and thimerosal containing vaccines can combine to cause autism; 2: that thimerosal-containing vaccines, by themselves, can cause autism; A third theory - that MMR vaccine, by itself, can cause autism was later abandoned due to extensive evidence to the contrary, and so was not adjudicated in test cases by OAP. Note: Given the depth of discussion deserved by The Hannah Poling case, also part of the OAP, that case will be presented in an independent post (coming soon).


In 2007, three Special Masters heard three test cases to represent the first theory of causation:
Cedillo v. SHHS Case No. 2010-5004
Snyder v. SHHS Case No. 01-162V; and
Hazlehurst v. SHHS Case No. 2009-5128
The Special Masters’ decisions in the three test cases, issued on February 12, 2009, rejected the petitioners’ causation theories. All three of the Theory 1 test cases were appealed (to court of Federal Claims & U.S. Court of Appeals for the Federal Circuit). The Special Masters’ decisions were upheld each time.
From George L. Hastings, Jr., Special Master, in the case of Michelle Cedillo, No. 98-916V:
"I concluded that the evidence was overwhelmingly contrary to the petitioners’ contentions.... Considering all of the evidence, I found that the petitioners have failed to demonstrate that thimerosal-containing vaccines can contribute to causing immune dysfunction, or that the MMR vaccine can contribute to causing either autism or gastrointestinal dysfunction. I further conclude that while Michelle Cedillo has tragically suffered from autism and other severe conditions, the petitioners have also failed to demonstrate that her vaccinations played any role at all in causing those problems."

From Denise K.  Vowell, Special Master, in the case of Colten Snyder, No. 01-162V:
"After careful consideration of all of the evidence, it was abundantly clear that petitioners’ theories of causation were speculative and unpersuasive. Respondent’s experts were far more qualified, better supported by the weight of scientific research and authority, and simply more persuasive on nearly every point in contention."

From Patricia E. Campbell-Smith, Special Master, in the case of  William  Yates Hazlehurst, No. 03-654V:
“[P]etitioners’ experts tended to assign greater weight to speculative conclusions offered by the investigators involved in the studies than did the investigators themselves. Petitioners’ experts also urged reliance on a few carefully selected sentences from particular articles which, when considered in the proper context of the referenced articles, did not support the propositions advanced by the witnesses. Moreover, because petitioners’ experts relied on a number of scientifically flawed or unreliable articles for several important aspects of their causation theory, their testimony on those aspects of their offered theory could not be credited as sound or reliable. Finally, petitioners’ experts made several key acknowledgments during testimony that rendered their proposed theory of vaccine causation much less than likely.”

The full OAP record encompasses tens of thousands of pages of medical literature, more than four thousand pages of hearing testimony, and fifty expert reports. The committee ultimately concluded that a causal relationship between MMR vaccinations and autism did not exist. The committee based its conclusion on four factors:
1) A consistent body of epidemiological evidence shows no association, at a population level, between MMR vaccine and autism spectrum disorder.
2) The original case series of children with autism spectrum disorder and bowel symptoms and other available case reports are uninformative with respect to causality. In addition, they were ALL linked to Andrew Wakefield's fraudulent Unigenetics data and none of the studies indicating the presence of measles virus in autistic children had been successfully replicated by an accredited laboratory independent of Dr. Wakefield or Unigenetics.
3) Biologic models linking MMR vaccine and ASD are fragmentary.
4) There is no relevant animal model linking MMR vaccine and autism spectrum disorder.


From Patricia Campbell-Smith, Special Master, in the case of  William P. Mead, No. 03-215V
“The underpinnings for the opinions of petitioners’ experts   are scientifically flawed, and in the absence of a sound basis for the offered opinions of causation, those opinions cannot be credited....Based on the developed record in this proceeding, the undersigned is unpersuaded that the thimerosal content of the prescribed childhood vaccines contributes to the development of autism as petitioners have proposed under this theory of general causation.”

From George L. Hastings, Jr., Special Master, in the case of Jordan King, No. 03-584V
“...I conclude that the evidence is overwhelmingly contrary   to the petitioners’ contentions.  The expert witnesses presented   by the respondent were far better qualified, far more experienced, and far more persuasive than the petitioners’ experts, concerning the key points.  The numerous medical studies concerning the issue of whether thimerosal causes autism, performed by medical scientists worldwide, have come down strongly against the petitioners’ contentions. Considering   all of the evidence, I find that the petitioners have  failed  to demonstrate that thimerosal-containing vaccines can contribute to the causation of autism. I further conclude that while Jordan King has tragically suffered from autism, the petitioners have also failed to demonstrate that his vaccinations played any role at all in causing that condition.”

From Denise K.  Vowell, Special Master, in the case of Colin R. Dwyer, No. 03-1202V:
"To prevail, they must show that the exquisitely small amounts of mercury in  TCVs that reach the brain can produce devastating effects that far larger amounts experienced prenatally or postnatally from other sources do not. In order   to account for this dichotomy, they posit a group of children hypersensitive to mercury’s effects, but the only evidence  that these children are unusually sensitive is the fact of their   ASD [autism spectrum disorder] itself. In an effort to render irrelevant the numerous epidemiological studies of  ASD and TCVs that show no connection between the two, they contend that their children have a form of  ASD involving regression   that differs from all other forms biologically and behaviorally. World-class experts in the field testified that the distinctions they drew between forms of  ASD were artificial, and that they had never heard of the ‘clearly regressive’ form of autism   about which the petitioners’ epidemiologist testified. Finally, the causal mechanism petitioners proposed would produce, not  ASD, but neuronal death, and eventually patient death as well. The witnesses setting forth this improbable sequence of cause and effect were outclassed in every respect by the impressive assembly of true experts in their respective fields who testified on behalf of respondent."

When parents are bombarded with propaganda, it's easy for us to forget a critical truth about medicine: there are risks. There always will be. But we can't lose sight of the greater risks of infectious diseases. Diseases that can sicken and kill millions of children worldwide. Diseases we haven't had to suffer through because of vaccines. Vaccines offer powerful protection from some truly horrific diseases. Is that protection perfect? No. But neither is any other tool used in medicine. We have a mechanism to help anyone who is injured by a vaccine, VICP. Let's allow vaccines help the rest of us.

Citations:
This post provides in-text links to all relevant court documents and an article that summarizes this nicely. If you have questions, please feel free to ask. I am here to help.