My Take on COVID19 Mask Messaging 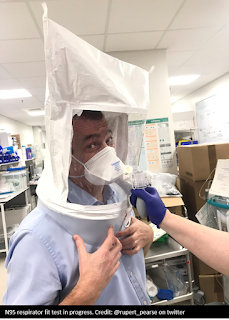 I'd like to take some time to talk to you about my personal view of the mask messaging debacle, from the beginning of the #COVID19 pandemic until now. I have been thinking a lot about this lately, in no small part thanks to my friend @mi55br00ke, who reminded me of some important issues we’re all being faced with during this unprecedented time of uncertainty. These are my thoughts on my messaging on Twitter, and mine alone.

When this all began I was one of the virologists advocating against masks and here’s why: People wanted to wear masks that protected themselves and I knew that A) in general, people wouldn’t have access to N95s designed to protect from biological aerosols, and B) if they had access to them, they wouldn’t have the tools needed at home to fit test them properly. I tried to make it clear that my logic was that in light of those things, I worried people would buy any old N95 and then think they were more protected than they were. That is not flawed thinking, but I realize now how incomplete the message was.

My perspective is really informed from extensive experience in high-containment BSL4 labs. That training really gives me a very strict view of protocol adherence. If a mask isn’t going to protect you as much as you think it will, then you shouldn’t wear it. Period. It’s dangerous. And when it turned out we couldn’t get N95s and there was a shortage for health care workers, but we needed something because spread was taking off, then we started hearing about surgical masks to protect *from the wearer* and this I agreed with. I still tried to make it clear that the surgical mask would not protect the wearer, but that seemed to be lost in the fray and then everyone thought we should have been advocating for surgical masks from the beginning.

Maybe we should have, but I still think the message that surgical masks do not protect the wearer as much as they think it will, is an important thing to make clear. And I would not change that messaging were I to go back in time. But I think I made a serious mistake with my messaging in that it was not complete. It’s not something I can change, but I can tell you I am sorry for it and hope that in the future this mistake can be avoided in an effort to more effectively guide people on this issue.

What should the messaging have been, in my opinion? I wish I would have said what I needed to say on surgical masks not being as protective as one might think, but I would add next time:


That's a big omission and it is my regret in all of this. I was being pedantic, as I usually am, and in so doing I neglected to point this out. It kills me because I know this messaging affected decisions people made including those made by the people caring for my mother. Had they implemented having residents of her nursing home wear surgical masks early, would she still be alive? Maybe. Honestly, I think probably. Was I responsible for the messaging the staff in her facility heard? I really don't think so. I spoke to them and tried to get them to take the virus seriously quite early on and they didn’t hear me. But I could be wrong. I know that. I live with it. Did my messaging directly impact anyone on Twitter? I don't know, my voice doesn't reach very far, but it very well could have. And that alone is enough for me to recognize how big this mistake was.

My goal here is to help you understand my thought processes along this journey and hope you can understand my logic and how it led to that mistake. A mistake I deeply regret. Was it intentional? No. Does that matter? Not really. Especially when I have been defending my initial position strongly since then. I defended it and still defend it as an effort to help people by communicating that they wouldn’t be as protected as they might think they are with N95s or surgical masks. But I should not have stopped there. I should have been less pedantic and more aware of the need for the information that I recognize now would have been more helpful.

I also recognize that this post won’t undo the damage. It’s not intended to do that. Nothing can undo the damage. I know that. It’s simply me coming to you in honesty and saying, I hear you. I feel your anger and frustration and I know I played a part in that. I am expressing my genuine regret. Regret for the inadequacies of my messaging. And to let you know, I will do better in the future. I hope you allow me that opportunity.