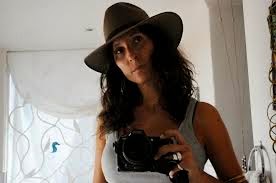 Welcome to the Mariella Furrer Page at Pathogen Perspectives! You are probably wondering why I even have such a page. well, let me explain. While searching for photos of the 1995 Kikwit Ebola outbreak I came across Mariella's website. She was in Kikwit during the outbreak and took some powerful photos. Wanting badly to use one for a post, but expecting not to hear back from her, I emailed her and asked if I could use one. She responded!! In fact she not only emailed me back, she said she would be happy to let me use a photo and that she appreciated my efforts here at this blog. Wow!

Well, as I explored Mariella's website further I realized that she was more than a simple photojournalist, she was an activist spending her remarkable career championing causes that most find too difficult to stomach. She is a hero and I want to share her work with you. In addition to documenting some of the worst human rights injustices such as the Rwandan Genocide, and female genital mutilation in Kenya, Mariella has been fighting tirelessly for over a decade to expose horrific child sex abuse in South Africa. She published My Piece of Sky, a book that documents this journey and is available for purchase here. She describes what this journey was like in a riveting piece by David Rosenberg published earlier this year at Slate.

So to Mariella, I am honored to be able to use your photos on my blog. Thank you, and thank you for continuing to work on behalf of those who otherwise may not be heard.

Mariella Furrer, Swiss/Lebanese, was born in Beirut and has lived in Africa her whole life. She attended the Documentary Photography & Photojournalism Program at the International Centre of Photography in NYC, and has since been working as a freelance photojournalist based between Kenya and South Africa. She has covered Africa extensively and has worked on stories in Europe, the Middle East and Asia.

Her photography has appeared in various books around the world and her work on the Rwandan Genocide is on permanent display at the Memoria y Tolerancia Museum in Mexico City.
Mariella can communicate in several languages- English, French, Spanish, Italian, Arabic & Swahili.